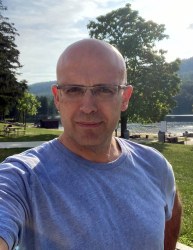 My research explores the intersection of medieval and early modern Spanish literature, philosophy, science, and culture; particularly, I examine how the medieval processes of syncretism and hybridization of Mediterranean intellectual traditions in Iberia manifested themselves in the transatlantic world of the post European-Amerindian encounter. Accordingly, I examine how broad intellectual debates—including literary ones—configured and reimagined historical movements.

Currently, I am concentrating on relevant and extensive processes of translation and the reception of foreign intellectual achievements; from the acceptance of Muslim, Jewish, and Classical traditions in the Castilian court of Alfonso the Wise, to the installment of Neo-Scholastic and Neoplatonic thought in early American universities and intellectual circles. My latest published article, “If you want to pray to Mercury, wear the garments of a scribe:” kuttāb, udabāʾ, and readers of the Ghāyat al-Ḥakīm in the court of ʿAbd al-Raḥmān III,” Journal of Medieval Iberian Studies, vol. 14, no. 2, (2022), is an example of these studies, is an example of these studies, which I will develop in a future monograph focused on Hermes Trismegistus, and how he came to be seen as a cultural mediator for learned men of different religious traditions in medieval Spain. Through this figure, who represented the ideal teacher and philosophical mentor to many pre-modern thinkers and writers, I explore the role of non-Christian culture in the growth of Christian literature and philosophy in Spain.

I also have authored publications on Spanish Golden Age theatre and playwrights such as Lope de Vega, Calderón de la Barca, and Vélez de Guevara. I am particularly interested in how these authors depicted and interpreted medieval and early modern history for their audiences, and also in the portrait of foreign religions in both historical dramas and hagiographies. In this regard and with a Mediterranean Studies perspective, I published the scholarly edition of Lope de Vega’s La Santa Liga (Gredos/Universidad Autónoma de Barcelona, 2016), focused on the Ottoman-Spanish wars,